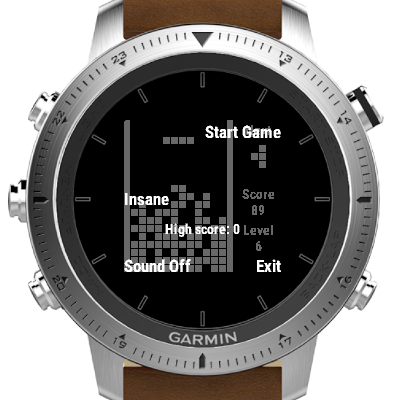 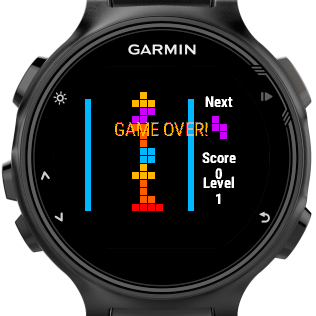 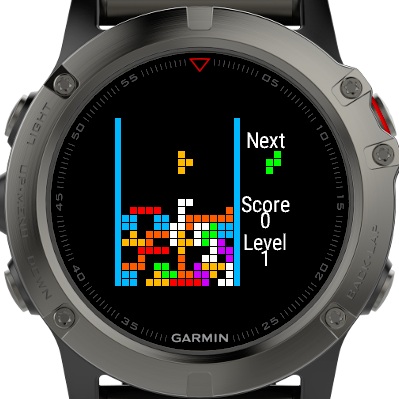 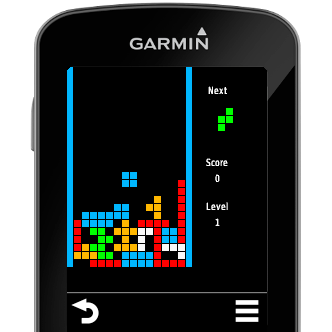 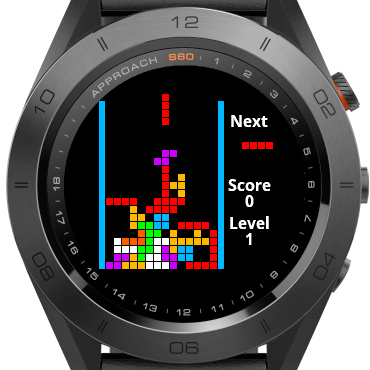 I love the app but I couldn't figure out how to add it. I played with it for a few minutes.

Huge praise to the creator of this Garmin app, it was a joy. And even though it isn't perfect it was certainly fun for a little bit. Well... I think I have the unofficial world record for this version. I scored 204 points, so let me know if you got any higher, but I topped out really just to end the game, I could have gone longer because the game is paced pretty slowly, but it was my first time playing this version and I really just wanted to log a score. A couple of things keep it from being true to the original: -The tetris playfield in this app is the wrong dimensions. In this app the field is 14 blocks wide by 24 blocks tall, when the original tetris field size is 10 blocks by 20 respectively. In the end this makes it easier to play because it gives you more options for placing pieces, but it takes longer to score lines. -The scoring is very inaccurate. In the original tetris scoring a single line gives you 40 points, a double gives 100, a triple gives 300, and a tetris (clearing 4 lines at once) gives 1200, and all these had a multiplier depending on what level you're on, so you get more points the higher the level. In this app you strictly get one point per line cleared which removes the incentivation for scoring more than one line at once. -Lastly, the pacing is pretty slow. I got to level 20 and the game felt like it had barely sped up at all, and I was able to easily continue scoring lines manageably. Maybe consider increasing the drop speed a little faster as you increase score. I mention these differences, but it was honestly a very pleasing experience, and I ended up playing for a while, so I don't think the button scheme is impossible to adapt to. The only reason I bring these points up is in case in a future update you hope to make the game a little truer to the original, but thanks for what you've already provided.

Thanks for the feedback Ty. Much appreciated!

This is perfect! Exactly what you'd want. A must-have on any watch

A little hard to play on a tiny watch but I guess nothing can really be done about that (it probably doesn't help that I'm already pretty bad at tetris on a bigger screen lol). More than once I've used this to pass the time when I was bored and didn't even have my phone with me, so I'm grateful for that.

It's really great, I love being able to play classic games on my watch like this.

One of the best games ever made in the store,works perfectly with all my Garmin watches,as it always has,and I've enjoyed it immensely through the years,as I still do,given to us all freely,Thank you very much! :-)

Hi. I was wondering if the vivoactive 4 will be supported at some stage? Keep up the good work. Thanks.

It is hard to move it over

This is awesome it works super well on vívoactive 3

How can i install the game on my forerunner 235?

I really like this app. It's working great on my device and I hope you keep making these great games.

Compatibility list said it was compatible with the vivoactive 3. It is not.

Hello, I have it installed and running on my Vivoactive 3 device. You can use “Contact developer” and describe the problem you see. Then I’ll look into it. Thanks!

How do I get to it on the garmin watch

Awesome in cars when your waiting to get somewhere

Not a good game on the vivoactive 3

We’re do I find the app in my vivo active 3?

On the Vivoactive 3, you scroll down until you see the 4 collered dots. Push on the dots and you should see the app.

Nothing wrong with the app thank you so much but some times a bit glitchy and my watch restarts is this a problem?