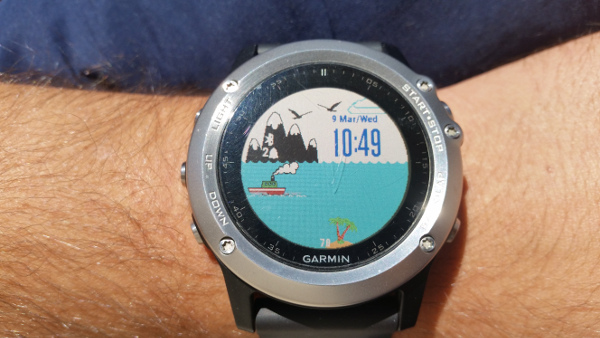 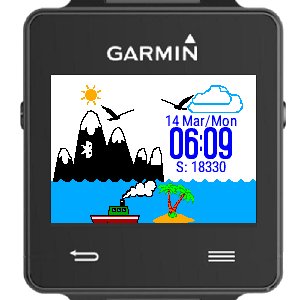 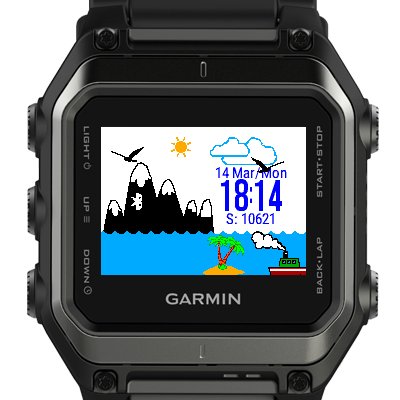 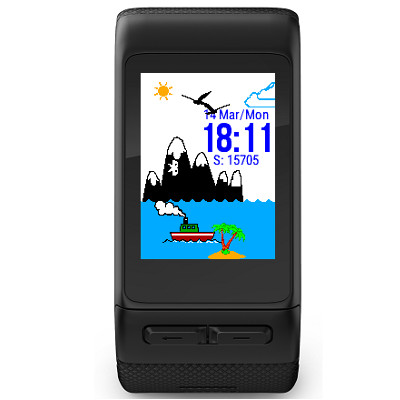 Switch to a different watchface or a default one. Then run Garmin Connect app and hit the upper menu, go Garmin devices, select your device, go to a page like activities, apps and more. Find there the watchface and remove it...

It should work. Try again later, maybe there is an issue in the system...

It shows the battery level in the snow level of the latest mountain. The higher the battery more black it is. Each white level drop means or % drop.

Does not allow me to uninstall it!

Watchface doesn't have any capability not to allow you for uninstall or any other thing. However, simply you can not uninstall a watchface if it's on the screen. Go to Settings, Watchfaces and choose a different watchface. Then uninstall the watchface.

Very nice. And pretty fast too, unlike some (popular) watch faces which takes seconds to render. Would be great if the steps goal and move alert be drawn, maybe on the mountains, like, each mountain could be a graph of one of those, instead of only one being used for battery.

This watch face made me smile as soon as it appeared,I had to show my Mother and son and made them smile to. Great animations, really glad to have downloaded this one, Thankyou for all the effort put into it.

Lovely watchface! Genius design! Clear and clean! Love it and keep it everyday. And I think it's a good idea to offer users an option to choose between Steps and Heart rate without adding data display, simplicity is the most beautiful thing you know. If more ocean theme watchfaces with similar design become available I will be crazy happy. PS thank you developer and since many users are in Mainland China area where no paypal available, if you can accept Zhifubao I would be very Glad to donate u(kiss)

One of the best watch faces available here.... Great Job !

This is lovely, reminds me on holidays :) I have some suggestions for improvement. Everything on the screen is moving at the same time. This is too much. Suggestion: the ship moves forth and back in one hour, so the ship positions indicates if time is going to a full hour or to a half hour. Cloud should move slower than the birds. Sun could have a position depending on time to sunset. Actaully sun could be replaced ny the moon after sunset, the water changed to dark blue and the sky to blue to indicate night. But those are only suggestions, this wathcface will be my holiday watchface:)

I love this watch face but there's an exclamation mark & a number behind it on the third mountain. Any fix for this?

I love it! Looks great and works perfectly.

I'm loving this watch face. BUT, I have an exclamation mark and behind it a number two in front of the third mountain from the left. I've tried reloading it but no change. I have a vivoactive. Any tips? Cheers

I really like this watchface. There is a small problem: on the 230, the time is too close to the mountains. But it looks fine in the youtube video, so I guess it is something about software compatibility with 230.

A very unique watch face which brings out a fun and none serious side to the Fenix! The design is great, information and animations are enough for daily use and it's a great talking point too! An idea may be for triathletes running, swimming or riding. (In any order!)

5 stars for the new version with the mountain/battery level!

Forerunner 230 - brand new. My watch is 100% charged and the exclamation point is permanently fixed on the screen.

This is gorgeous! The colors are so vibrant. I would also love a battery indicator. My FR 230 draw number is 70-72. Love the animation!

Vivo Active 61. I also would like some type of battery meter. Maybe a mountain top that changes color. I like the watch face.

Awesome watch face, well done. My FR 235 has a 69ms redraw rate. I'll give this one 5 stars (and I will!) once you're able to add a battery measure somehow keeping the screen as clean as it is now :) Maybe a thin lateral filling bar? Maybe using the sun's height above the sea level to give a visual indication (not a percentage meter)? Just me thinking out loud... Thanks for your work!