PLEASE READ ENTIRE DESCRIPTION FOR HOW TO ADD AND CONFIGURE THIS DATA FIELD</p><p></p><p>Watch the glass fill up as you track the number of beers you’ve earned during your workout! Rather than just seeing a number, feel your anticipation of a cold one rise along with the fill level of the mug!</p><p></p><p>=== HOW TO ADD THIS TO YOUR DATA FIELDS FOR A WORKOUT ===</p><p>To use Connect IQ Data fields, you must manually ADD it to one of your activity data screens, it won't show up automatically. It varies from device to device, but it's usually under "Edit Screens" or "data screens" and then you replace or add one of the existing fields. On the Fenix 3 devices, go to Settings | Apps | [app name] | Data Screens, then there are numbered data screens, and you dig into one of those to replace one of the fields.</p> 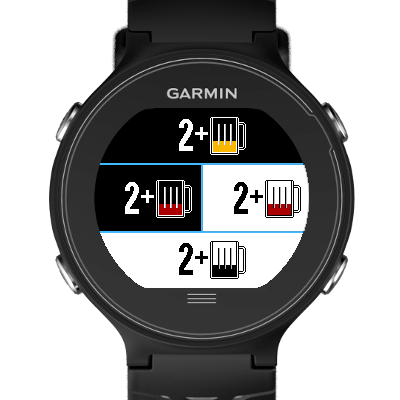 Fun! They should make one for Tacos earned.

Does not work with Vivoactive 3

It should work, can you contact me directly and we can perhaps figure this out?

Is there a way to view this after an activity?

Yes! It should show up on each activity in the “Connect IQ” fields on the web or in the mobile app (2nd and 4th tans of an activity)

Great Idea! Love seeing the beer fill up as I run. :-)

Just downloaded. Now working on my viviactive hr. Pls illustrate step by step on what needs to be done if you have fixed it.

About 4:00 min into this Video covers how to customize a data field on the Vivoactive HR https://www.youtube.com/watch?v=AR0TNTYF1rk

What a fun data field. It would be nice have the option of wine instead of beer. It's become a bit of a fun ending of a hard day in the garden and comparing who has earnt more beers for their efforts.

Great data field! Love the concept. But after the latest update (1.7) to change the name, I had to re-download to get it to show up in my Garmin connect app. It is now there under its new name but I can’t open it to make changes to the calories/beer and what type of beer shows in the glass. Am I missing something?

Hi I would love to play but I have no idea how to enable the data field or how to add it to one of my data field screens. Please provide step by step instructions......I am not tech savvy. Struggling

A data screen for the stuff that matters. Configurable means I can adjust it to the UK pint. And adding the beer count to the Garmin Connect summary is a particularly nice touch. Indispensable.

Glad you're enjoying it, keep earning those beers!

Fun datafiled! You can bump of the calories per beer (as I did) if you prefer post-workout craft beers with a higher ABV. *** Note: for those who are looking for a widget/app, this isn't it. It's a datafield you can add to existing screens in the standard run/cycle/etc. apps ***

For those of you looking for a widget to track the number of beverages you've drank, do a search for "BeerCounter." Then you can subtract those from the number of beers you earned in your activities!

First of all you'll need to have this data field enabled within the activity you're doing in order for it to apply (just means you need to add it to one of your data field screens). They are stored with the event in Garmin Connect, both mobile and web, visible as a graph that grows during the activity (in yellow), as beers per lap (in the splits), and as a total for the entire activity (with overall summary data). View the activity on the web, and it's below the map, labeled "Beers Earned." If viewing the activity details in the mobile app, the total beers earned are at the very bottom of the 2nd tab, under the "Connect IQ" divider (you'll need to scroll down). and the earning graph is at the bottom of the 4th tab, a big yellow graph at very bottom of the page of graphs.

I really enjoy watching my beer glass fill during my activities! Thank you for your work on this! I would love to see this implemented as a widget that could track beers earned all day, not just in an activity, as well.

I love it, but wish it was a wine glass getting filled. Can you so it?

Finally a data field that counts calories in a way that makes sense :-)

App not storing beers earned into activity on Garmin Connect after v8.30 upgrade for Fenix 3. It was working before v8.30, broken since then. Br

Sorry to hear it's not working. I can't control bugs in the Fenix 3 software.

I love the new update. Also, this was MOTIVATION last century!

Sorry, downloaded today and could not find beer on my Vivoactive HR ( maybe I drank it!) 2 stars at this stage for the good idea and hope you get over the problems.

As stated, data fields have to be added to your screens, which is done in the preferences for each activity. Once it's been added to your activity data screens, it will be there!

Works great and looks even better!

Amazing, I have been waiting to be able to record the earned beers and you made it... great add... thanks

Love this data field. It's a fun way to measure calories burned without looking at a boring number. I have all my friends hooked. They always ask me how many beers did we earn on this ride!

Great little App to add fun to a ride but how can I configure it on an Edge 1000?