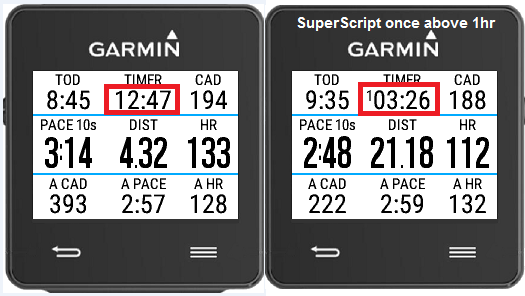 Love the PRO version, very nicely done and configuration is very easy. Fields are easy to read during the run and much more convenient than looping through multiple data screens. Well worth the money. Can't understand people complaining about trial version - this guy spent his time developing, testing and supporting the users and it is not worth it for you to buy him a virtual beer.

Perfect it has all I need. It is worth the money :) thank you for creating it :) I only using first data field ;)

The App is great! It is nice to have a data screen that shows up to 7 different fields. And better still, it is possible to customize it to exactly the fields you want (all you need to do is email the app developer). I had questions and needed customization of the app and the developer was super fast in his responses. Now I have exactly what I need to hit the trails---and I am having fun with it. Highly recommended!

It was a very bad surprise when the red message was shown, actually I was in the middle of the training session. I love your datafield, it is very useful but It is not the way a trial version must work. I fully agree that developers must be compensated for their effort, but this type of things never, never should impact the customer. Start a discussion with Garmin how to do that, but you must remember that it never, never should impact your customers. The users are your customers, they have been impacted by the change you made, the customer satisfaction is key to you if you want people to go for the pro version.

Got the PRO version after using the app for the past couple of months. It works as advertised and I find the single screen much easier to use during my runs, versus scrolling through several screens. While I can understand the frustration regarding how the developer has implemented the 'trial' and also at the PRO version cost, I also strongly feel that developers should be compensated for their efforts to improve the Garmin IQ platform. It doesn't seem that Garmin has given developers many easy options to implement trials or charge for their apps. Perhaps a future version could implement the trial in a more user friendly manner - i.e. full featured trial for 10 uses, or for a month period, etc.

Its not a Trial, its 15 min Demo. Why it is not in description?

I love this data field. Beats having to scroll through the other screens. Looks like a native app. Great job.

Love this app, all necessary info in one quick look on my watch, Garmin should have thought of this themselves. Developer is quick in its responses, helpful and very cooperative! Great suppport!

A timeout feature is not an upgrade. Don't mind paying up front if I know what I'm getting; but getting extorted for payment after the fact is something else. You have plenty of data fields already and someone will be adding something similar very soon:)

contacted Dev, got PRO, works as charm and you even get the chance to customise some fields.

was once a useful data screen, why not advertise how much you want? Or is that against Garmin rules. Poor show really. Never mind, will manage without it.

Confused: just got new Vivoactive and liked the look of this widget so I downloaded it. Went on a run and twice during the run a timeout black bar with a message saying session time and it stopes my session. Not sure if it was widget or just a setting. Help?

I asked the developer for a different layout with the addition of a battery icon. Very quick response and very pleased with the layout I now have which I use for cycling too. Would be nice if Garmin allows 3 Connect IQ data fields but I now use my third row to show average pace in the running app and average speed in the cycling and walking apps.

Works great on my Vivoactive!