A fully configurable bi-colored watch face.</p><p></p><p>Up to 9 fields to display with 23 possible data (only 14 for devices with SDK 1.X.X), including no data</p><p>Data are automatically converted to the system units used by the watch.</p><p>Seconds always on (only for compatible devices).</p><p></p><p>Main screen:</p><p>- Battery left, date, time, 3 configurable fields</p><p>- Notifications icons</p>

Version 1.40</p><p>NOW: trying to introduce Garmin weather (only for compatible models), new option to choose for the main graph. You must sync your watch with Connect to obtain and display these data, which correspond to a 1h forecast from the current time (over 12h max)</p><p>------------------</p><p>Version 1.39</p><p>FIXED: potential bug with the new O2 oxygen saturation data on some devices</p> 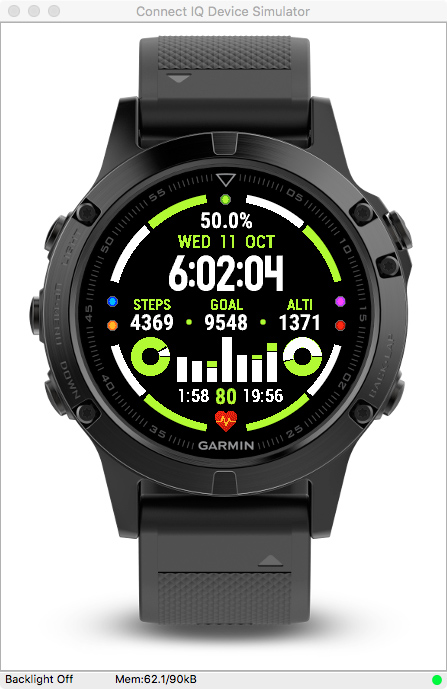 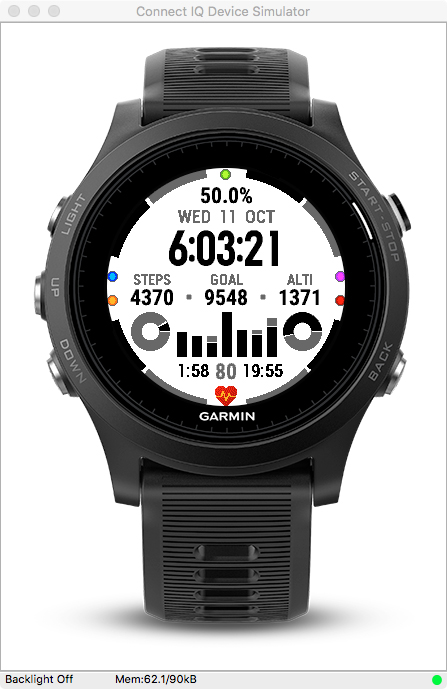 Five stars from me. Response is a little bit slow but anyway fiver is deserved. Keep improving.

Amazing watchface, full of option, can you make text a little bigger? On Fenix3 is hard to read when you are tired :) thank you

Not working on VA3

Good watchface with excellent data. But I'm not using it, because for some reason it takes a lot of time for the watchface to initialize. When I do something with the watch and get back to it, it usually needs more than 5 seconds to display the watchface. This is why I'm not using it. Pity, as it looked promising.

Thanks for your comment. This kind of issue comes from the firmware of the device, and not from the WF itself. On some devices, the recent firmwares (or beta versions) have a negative impact on the responsiveness of the watch, because this does not happen with other devices. And, unfortunately, I can not do anything for that.

Great. Now works at my f5x FW 7. could you please make barometer with one decimal ? Like 1028.2 hPa. Greetings

Not working on Fenix 3, can U fix it?

For the upper and lower left Arc on the main screen, please add a feature so that when goal is achieved, the color change to red or green etc. This is particularly useful when theme color white/black is selected.

This WF is also configurable with the free version, just go to the app settings. The free and paid versions work fine on the majority of the listed devices, except for a small minority of F5X users (only two in my knowledge) who experiment some weird issue with their device, probably due from the device itself (firmware, beta version, hardware ?) otherwise, the WF would not work on any of these models. That's not the case.

Thanks Javiel for your comment. The Fenix 3HR can not display seconds with the 1Hz mode however, I added an option to show or not seconds on the main screen, for all the devices.

This clockface seems to have some serious issues. On my Vivoactive 3, the display shows only occasionally all elements. If I swipe troug the menues and back to the clockface, suddenly only the time is showing. Everytime I manipulate something on my device, the clockface changes the showing elements.

Thanks for your comment. This kind of behavior is probably due to the watch itself as there is no issue at all with all the other devices so, it's somewhat strange and could derive from the firmware behavior or hardware structure. I do not own a Vivoactive 3 so, I can't test directly the WF on it but, within the simulator, everything goes fine. Furthermore, if there were bugs within the code, you should have some IQ errors or crash and, it seems that it is not the case. I invite you to contact me by email so, we could try to find a solution, if possible.

I love this wf!!! Lots of info about your daily activity! Good job!

Thanks for your comment and compliments. Nice to read too. I take your suggestion in consideration and probably it will be added in a next version.

Awesome watch face! I've used many watch faces but I think I found my go-to watch for now. very clean easy to read really like it nice work! Whenever you get a chance could you please add some more color choices. Thank you!!

Great Work! Clean look, all needed info at a glance! Thanks for this Masterpiece!

Thanks for your comment and compliments Mitschu. You are welcome and happy to please you

5 Stars! What els? Thanks for your work! Paid version has a great second screen with many informations. Works fine on my fenix 5X.

Thanks for your comment and compliments Allalin72. Nice to read

I've tried lot of WFs and I think this could be the best of all. I'd say it's perfect, an incredible masterpiece. Many many thanks for such development

Thanks for your comment and compliments piemgici. Nice to please you