A widget to make sure that, in case of emergencies, you have the important information for others to help you on your watch: name, date of birth, phone numbers, and perhaps some other information. A safe idea!</p><p></p><p>If the widget does not behave as you expected, please contact the developer, so the issue can be fixed or clarified.</p><p></p><p>Fill in this information in the settings from the Connect Mobile app, Garmin Express or using the menu button on the watch. This article describes how you can change the settings: http://www.harryonline.net/connectiq/changing-settings-garmin-connect-iq-app/4152</p> 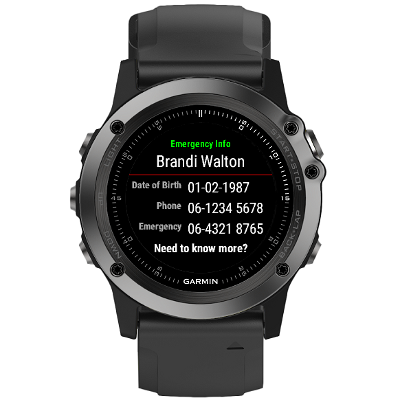 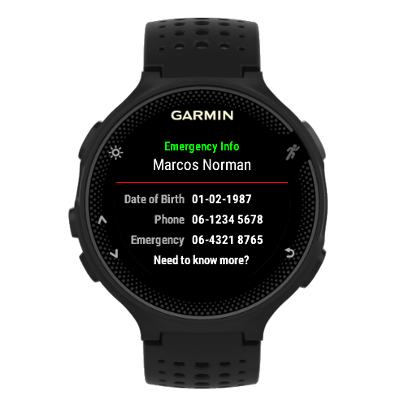 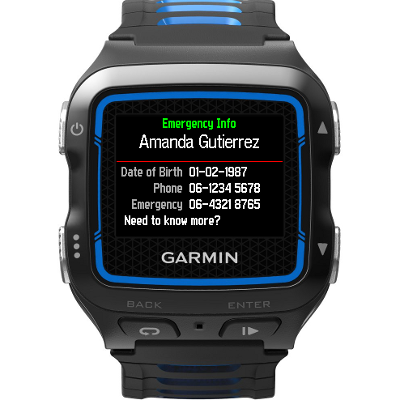 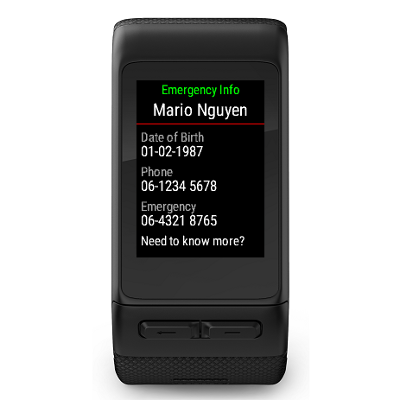 Does not display on the Edge 820 device... it'll be listed in Garmin Connect along with any other apps/widgets you've downloaded, and you'll be able to go into the app settings from Connect to update your own info, but alas, it doesn't display on the device. Even if it did, there's no obvious "Emergency crew look here" type of button in the Edge 820 that would tell first responders they can get vital medical info and contact numbers for the injured.

You are right that Garmin has made it very hard to find a widget on the Edge devices, that's a problem for all widgets. You can access widgets from the home screen, swipe down (this shows some settings menu), then swipe left or right to see the installed widgets. Emergency Info should be one of them, if you have more widgets installed, you may have to swipe a few times left or right.

Hi, Great app. However on Fenix 5 beta firmware 4.14 the watch crashes on your app.

Sorry for the late reply, I do not get a notification when a new review appears. In case of any issue, better contact me using the Contact Developer link. I could not reproduce the crash, as I don't have a Fenix 5 and it works on all devices I can test. Can you send me the file GARMIN/APPS/LOG/CIQ_LOG.TXT on the device?

Worked really well for a little while & then after connecting to my computer, all my data went blank. Even updating it and saving it in Garmin Express each time does not work.

Nothing has changed on the app recently, perhaps has to do with a firmware update on fénix 3? In any case, entering the information again should fix it. If not, or in case of any issues, please contact the developer.

Works like a charm on my 920XT, thank you for the widget!

Very handy widget for storing next of kin emergency contact phone numbers in. Really great too as I can never remember her mobile number and a couple of up clicks and there it is. Great layout. Thanks Harry. I wonder if you'd consider making a very similar widget to store a list of words in - a pre-run checklist - as I've a dozen things to remember but usually forget one of them. Be fantastic & very much appreciated if you could (:o)

up to v.1.3.3 worked well with Epix, but after the update it does not work (data not loaded/shown) is it not compatibile with Epix anymore? :(

Much better now, thanks for your work.

Letters are too big on Fenix 5x. Not possible to read whole name or phone number!

Yes, this is a known issue, as mentioned in the description. Unfortunately, the Fenix 5x does not have a smaller font size, so it would require a custom font--hence more time.

Works on fenix 3HR and I added Blood group on the last info. Tried to reboot and start the watch not connected on the phone and the info are still there, all what we need. It's really a great idea for an outdoor watch. Thank you

Does not show my data on my Viveoactive HR. I go to the settings screen and input all my information and then sync my VAHR again. Nothing still shows up on the screen of my watch. Love the idea but can't seem to get it to work. Be happy to change my rating to 5 stars if can get the app to work!

Please note that developers do not get a notification of new reviews, so unless I happen to check this page (which I do occasionally, but not daily), I may not see it for a while. I'd be happy to provide support if it does not work as expected, but use the link in the App info or the Contact Developer link, so I get a notification and can get in touch with you.

Works well for me.

Works great. Love it. Thanks!

I am unable to change the settings on this widget. – I’ve tried doing it on the watch (Garmin Vivoactive HR) and the functionality isn’t there. – I’ve tried on the Garmin Connect Mobile – and there is no screen as described in the article above which shows a "Settings" option – I’ve tried on my PC through Garmin Express-Manage Apps and, again, there are no “3 blue dots” indicating “settings” in the manage apps area of Garmin Express next to the Emergency widget. This is a very good widget idea, but totally useless if you can’t change the settings. any suggestions? I've tried to write the developer directly with no response.

Great and very usefull app on my VAHR. Hopefully won't really be needed by others on my watch...

Excellent widget! Best one of its kind.

Does not show my data on my viveoactive hr. It also does not change the name settings as they were entered, so for now the widget on my garmin does me no good.

I double-checked it today on my vivoactive hr, but here it worked without problem. Make sure that the watch has synchronized after changing the settings. If it still does not work. you can contact me.

Looked good but when downloaded and tired to put info in data field, the app had no BAR to launch the data field. So, had an app with no info????

You can add info by changing the settings, see the link in the App info section on how to do this. You can contact me if this still does not work.

A clever and useful widget

Works perfect! A "Data Field" with this functionality would be very usefull.