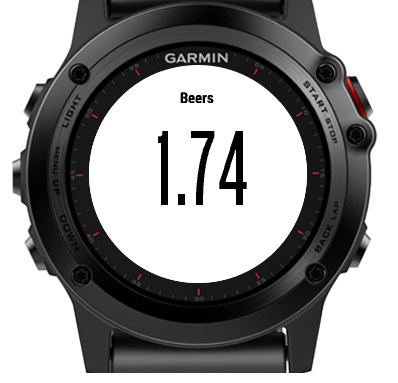 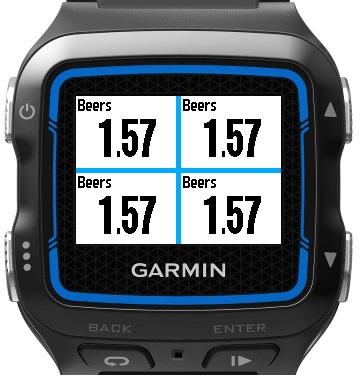 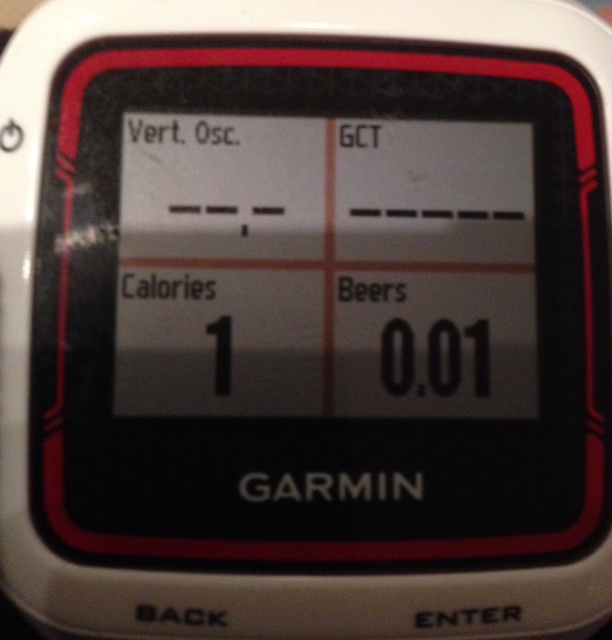 Cannot see it on the Vivoactive, and was looking forward to seeing how many liquid carbs I could have after tonight's speed session, looks like its plain water for me :(

Hi! I downloaded this data field onto my VIVOactive, I don't see it anywhere. Where do I find it?

Great idea, it works well, but I can't give full rating as Bud isn't real beer. Could you allow customizations?

Very cool, but I also suggest a way where we can see accumulated beers at end of an activity thru the phone app or thru our history. Thanks!

Would be great if you could see how many beers you earned after you finished the activity. If you don't look before you end and save....too bad. Otherwise kinda cool.

This is a nice app! wold it be possible to make a version for gels? it wold be awesome for during race :)

As an avid beer drinker, this was totally for me! I actually have friends that went out and bought the VA because they saw this on mine... AWESOME! I've been using it for months and it works great!

Works as described. Customization would be great and would be a great future enhancement. I can't believe how many people don't know how to use data fields on their Vivoactive's. Mine worked first try.

Works perfect on my VivoActive device! It's a fun motivation to keep on running

Since there is confusion on how to use this app, I thought I would explain how I set it up. When you go to the data fields for running, biking etc, hit the menu button to customize the fields. Select the Connect IQ button, then select beer units. It will be a unit of measurement in your data field, it's not a separate page or app.

You have to explain how people can make this app work! It doesn't work on vivoactive

This is a seriously good idea. Like a rabbit chasing a carrot on a stick. Motivation to move! However it doesn't work. And apparently hasn't for a while with nobody motivating to fix this issue or explain how it works properly. App sucks due to this failure.

Won't show up on my Fenix 3. Has anyone any idea where to/how to find it?!?

Please allow it to show on the connect app!

Would like it to show result on Connect (Please allow this Garmin) Also since I like IPA's it would be nice to be able to adjust calories per beer up or down.

won't show up on vivoactive! what am i doing wrong??

Won't show up on my Fenix 3

Such a fun app! Downloaded it to my Vivoactive; you have to add it to your data fields manually, it won't just show up. My only complaint is you can only see it during the activity. I didn't look at my stats before ending run, and it was gone. No way to see how many beers I had earned :(. Would love to see it in the summary... Ran 'this' far in 'this' time at 'this' pace and earned 'this' many beers :). Thank you!!

Won't show up on my Fenix 3

Tried downloading it twice to my Vivoactive. Still hasn't showed up. Please fix.

I have no comment yet. Just where do i find it on my fenix 3 to see how many i have earned!?!?

Not working on vivo active

Won't show up on vivoactive